The DAO framework is side project of Slock.it UG and a gift to the Ethereum community. It consists of a definitive whitepaper, smart contract code audited by a highly regarded global security company. The software is free and open source for anyone to re-use.

Slock.it are developing the Ethereum Computer, whilst the final specifications are not available at this time it is likely that the design will be based on either Raspberry Pi or Samsung Artik running Ubuntu Core.

The unit will make it much easier to bring blockchain technology to the entire home or the office and allow individuals or companies or communities to rent access to any compatible smart object and accept payments without intermediaries.

You can now download the Slock.it proposal directly via the link below,  You can also find discussion on:-

Read more about it:-
on this thread at daohub.org.
more about the Ethereum Computer
more about Slock.it 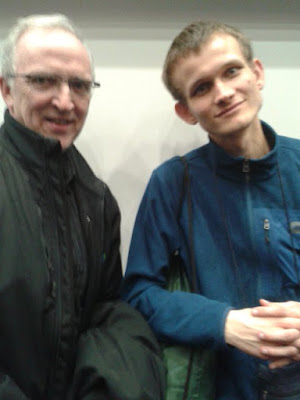 I feel very privileged to have been able to meet and speak with Vitalik Buterin in London recently.

Vitalik gave the most entertaining and interesting presentation on the theme:
"Blockchain and Ethereum Security on the Higher Level"


Update: Vitalik Buterin's presentation from the event is now available at:
https://docs.google.com/presentation/d/1LpqtiZLdBb5DsAS0xgCDsrvbGLhuhVkVUjUhuJGfYGg/edit#slide=id.g10cbae5d24_0_30


Regis is a decentralized key/value storage Dapp by ConsenSys. Use cases include property and domain name registry, and also online store product registries. Access control features and auction tools give the creator a suite of options for managing the way users interact with their registry.

John Hancock’s Lab of Forward Thinking (LOFT) today announced a collaboration with ConsenSys and BlockApps in the LOFT’s first Ethereum blockchain proof of concept (PoC). The LOFT will apply blockchain technologies to enhance the on-boarding of new wealth management clients in order to enhance one of the critical drivers of customer satisfaction.

The question of a DAO split will no doubt be a recurring theme as priorities change and DAOs evolve. This article is written in the context / operational confines of the DAO as gifted to the global community by Slock.it* as the code exists as of today's date - 14.Apr.2016.
--
The term 'Split' could simply be a single individual extracting their own investment.. aka 'LeaveDAO', 'ExitDAO', of course it could also be a group of investors opposed to a proposal but nonetheless in simple terms it is a mechanism to extract ones own investment...
As per the White Paper 6.3 the split data structure is used to split the DAO. It contains:
These are pretty vanilla and just do what is being ask = 'Split'
Scenario A
you are absent, ill, on holiday, without connectivity, upon return you see a proposal has passed, you do not like it for whatever reason. This could be to do with a new Contractor, a new Curator, the product direction, the cost, the people - whatever factor in the proposal or change in the landscape that concerns you - so you just Split (leave the scene) aka 'ExitDAO', LeaveDAO'
In this Scenario A if you 'Split' aka 'Leave' you are still entitled to receive rewards.

As per section 4. Majority robs minority attack - in the White Paper;-
"..a single token holder is able to both retrieve their remaining portion of ether and maintain their right to any future rewards associated to their previous contribution, as these will be sent to the new DAO automatically. Rewards are defined as any ether received by the DAO generated from products the DAO funded so far.."

As per section 7. Reward Tokens - in the White Paper;-
"..the DAO will send the accumulated rewards to the rewardAccount which is held in the ManagedAccount contract. Then and only then will the token holders of the DAOs that hold reward tokens be able to call the getMyReward function and receive their ether.."

"..this process guarantees that any DAO token holder whose ether was spent building a product will receive the rewards promised to them from that product even if they decide to split from the DAO.."

Points to Note:
Proposals voted on after the split will only pay out rewards to their respective DAO.
a DAO is a living business, failure to monitor proposals could have an adverse impact

Scenario B
Alternatively you could choose to sell your tokens / your share of reward, you may well make a profit.
As per section 2. Concept - in the White Paper;-
"..The ownership of these tokens can be transferred to other accounts using transactions on the Ethereum blockchain, as soon as the funding period is over."

There is an excellent decription of how to split (from a technical viewpoint) available at:
https://github.com/slockit/DAO/wiki/How-to-split-the-DAO

When you sell your Tokens you are also selling the right to rewards.
--
*
Slock.it UG are a Blockchain + IoT solutions company registered in Germany
For the definitive version of any code and the implications thereof reference should always be made to https://github.com/slockit/DAO

..for the purposes of clarity these are my own personal opinions based upon my own analysis of publicly available documents at this time.
Labels: DAO split

The Decentralized Autonomous Organization (DAO) is a virtual entity that exists in cyberspace / the internet. It comes into existence when a group of people decide to form a DAO.

Once this initial decision to create is taken the participants may decide to extend participation to a wider community. It is possible that this process could well be entirely anonymous (subject to the technical skills of the participants).

A DAO may be established with a view to raising or investing / managing funds raised, for example to develop a specific idea or a range of ideas or within a particular sector. Participants / investors 'invest' their funds from their own cryptocurrency holdings. This transfer of funds appears on the Blockchain.

Alternatively the purpose of the DAO could well be civic - to remove the inherent weaknesses of outdated political structures.

Each Block has a number, this places the 'Block' in the 'chain' of transactions. It also has the identifier / the keys of the Sender and the Recipient, the amount of the transaction and possibly some data embedded in the transaction. After a brief period of time (often minutes) this transaction is immutable;-

..that means it is unchanging over time or unable to be changed..

Funds flow to the cryptocurrency / Ether account of the DAO, tokens are issued relative to the amount of investment. Once the funds are raised the DAO plan / proposal, as previously agreed, may be to select a primary Contractor who has demonstrated significant / the necessary expertise (or indeed a number of contractors performing a range of tasks). The performance of Contractor(s) would most likely be embedded in a Smart Contract (SC) which would / could / may release funds at regular intervals without further human intervention.

A role within the DAO is that of  'Curator', the Curator would most likely be a group of individuals participating via a multisig wallet/contract, i.e. the wallet requires multiple signatures to release funds. The Curator controls the Whitelist of those contractors authorised to receive Ether from the DAO. The Curator's role is to;-


What Does a DAO Deliver?

Real Democracy: Deployment of the funds raised are voted upon, there are no cosy deals, bribes, backhanders. The process is open and transparent.
Real Operational Transparency: The DAO votes on proposals put forward by Contractor(s), engagement with Contractors would most likely be via Smart Contract (SC) between the Contractor and the DAO. The operating parameters would most likely be timebound, measurable, quantifiable and contractual.
Real Reputation: The Contractor does not come out of nowhere, in the legacy system one would wake up with a new provider and ask - where did they come from?, inevitably they could be a C level person's 'sponsor'.

Real Verification: Within the structure of the DAO the Curator verifies the authenticity of the contract code and the fact that the person / organisation proposing the contract are one and the same.
Real Performance: The Smart Contract will most likely have clauses that are triggered by time, by a numerical / measurable metric. Overall they will be contractual and non-performance will most likely trigger non-payment automatically.
Real Easy Termination: Termination will essentially be automatic, if you cannot perform your stage will cease to exist.
This is very efficient and elegant, the combination of the transparency of the Blockchain, the immutability of the smart contract combine to minimise the need for legal battles or court involvement, or recriminations.

It could be argued that litigation arises from lack of clarity and lack of immutability. Whilst we stand at the dawn of the DAO it may well be that the properly thought out, well structured DAO will ultimately become the vehicle of choice for those joining together for a common purpose.

At a political level or in the political sphere the real issue is that the edifice is built on lies, half truths, sleight of mind. It really is no way to run a planet.

The DAO structure is a most important evolutionary step:-


The DAO framework is side project of Slock.it UG and as completely opensource is being made available as a gift to the Ethereum community. Slock.it UG are a Blockchain + IoT solutions company registered in Germany (HRB 30026).

The Curators to The DAO were announced 25/Apr and are comprised of 11 members who are at the pinnacle of the development of the entire Ethereum concept.https://blog.slock.it/vitalik-buterin-gavin-wood-alex-van-de-sande-vlad-zamfir-announced-amongst-stellar-dao-curators-44be4d12dd6e#.1zyaxx6lp

Further elaboration of the DAO concept can be viewed via ;-

On DAO Contractors and Curators
A primer to Decentralized Autonomous Organizations (DAOs)
DAOs, or how to Replace Outdated Governance Models
Real time discussion on the DAO can be viewed via Slock.it Slack channels, (sign-in required):-
The DAO Forum | The DAO Framework | The Art of the DAO

An example of a pseudo DAO (which is not based on the Standard DAO Framework) is the recent Digix funding round - all transactions can be viewed on Etherscan - https://etherscan.io/token/digix - there are specific governance issues with Digix which will analysed in a future article.

Note: this is work in progress which is modified with new information as The DAO moves closer to creation
Last Edit 10.55 26/Apr/2016
Labels: DAO, The DAO, The Decentralized Autonomous Organization

the future of music is the Co-Op, stream to own!