The Rise of the Machine

The most recent McKinsey Quarterly focuses on the replacement of people by machines / robots.

Face up to The Future - Humans Need not Apply.

This process began a long time ago, as articulated by Nikolai Kondratiev* and his theory of cycles or waves. In the 1990's we saw dramatic increases in connectivity and global cross fertilisation delivered by the emergence of the internet. The next decade saw the banking collapse and the inequities of society in plain sight. The concept of the war sub-contractor operating as a 'business'.

This decade is all about dissatisfaction, a growing body of knowledge and awareness of Government ineptitude, inefficiency, a lack of accountability, increasing violence towards the citizen., and inexplicably a seemingly complete lack of grasp of comptech. Of course there are some exceptions in some Governments - nonetheless citizens are beginning to push back; in some cases via direct confrontation but in many others just by doing.

“You never change things by fighting the existing reality.

To change something, build a new model that makes the existing model obsolete.”
R. Buckminster Fuller

One factor in the mass adoption of the Gutenberg press was the reaction of town councils, they allowed the press to reside temporarily before moving 'the problem' elsewhere.

Elizabeth Eisenstein in her seminal work "The Printing Press as an Agent of Change" said:-

"The Printing Revolution occurred when the spread of the printing press facilitated the wide circulation of information and ideas, acting as an "agent of change" through the societies that it reached." (Eisenstein (1980)

We are now living in the age the technocrat, no doubt this will prove to be a critical development / driver in this context. Digital nomads, as agents of change, spreading tech religion, 'heresy' promulgated at the speed of light.

Examples of novel thinking recently realised are:-
All of this aided and abetted by the global democratisation of capital.


The combination of fractionalisation of computing power, the decoupling of money from State control and the sharing economy represent a remarkable convergence.

Ultimately this will lead to the decline of the brand, of mass consumerism, of the nation state as we know it today- The Robot Future Cometh

"Almost one-fifth of the time spent in US workplaces involves performing physical activities or operating machinery in a predictable environment: workers carry out specific actions in well-known settings where changes are relatively easy to anticipate. Through the adaptation and adoption of currently available technologies, we estimate the technical feasibility of automating such activities at 78 percent."

"A service sector occupies the top spot: accommodations and food service, where almost half of all labor time involves predictable physical activities and the operation of machinery—including preparing, cooking, or serving food; cleaning food-preparation areas; preparing hot and cold beverages; and collecting dirty dishes. According to our analysis, 73 percent of the activities workers perform in food service and accommodations have the potential for automation, based on technical considerations."

You May be Sceptical.. but

Domino's is bringing robotic pizza delivery to New Zealand. The pizza chain today announced that it will trial a battery-powered delivery robot in the capital city of Wellington

*
Whilst academic economists cannot agree on long wave theory (and this is not surprising since they cannot agree how to operate economies) and in this context it is useful to quote George Bernard Shaw:-

"If all economists were laid end to end, they would not reach a conclusion."


It is evident that we progress through different 'ages':-

The computer / internet / mobile developments are revolutionary and are changing every facet of business and how we communicate locally and globally. This revolution is only beginning.

Read the McKinsey report here:-
Where machines could replace humans—and where they can’t (yet)
By Michael Chui, James Manyika, and Mehdi Miremadi 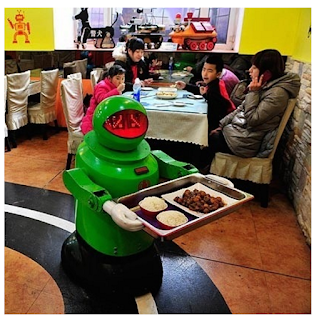 ..you know the story yourself about Spam so all comments are moderated..